A Look at the Most Promising COVID Vaccine Candidates 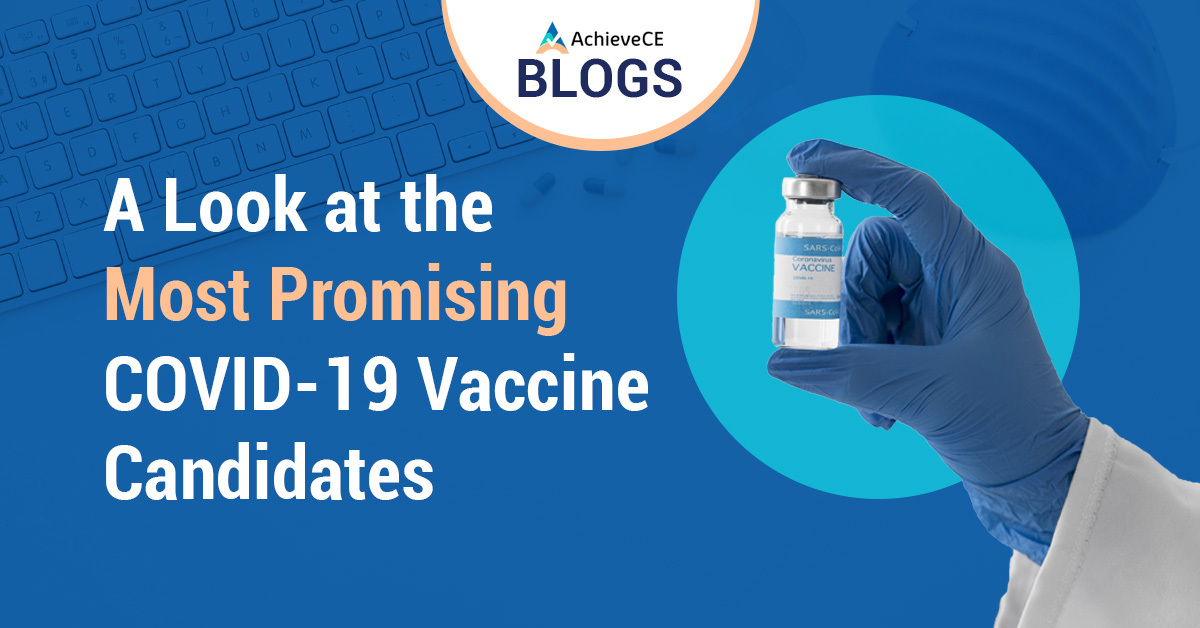 It has now been almost a year since the World Health Organization first alerted the world to a novel coronavirus outbreak in Wuhan, China. Since then, scientists worldwide have scrambled to create unique vaccine candidates to fight the pandemic. With over 200 unique vaccine candidates currently in development, the world now waits for the first COVID vaccine to be finally available by December.

A handful of those 48 have reached late-stage clinical trials. Three have already revealed promising results and are already applying for emergency use among high-risk populations.

Here are the most promising COVID-19 vaccine candidates to date: 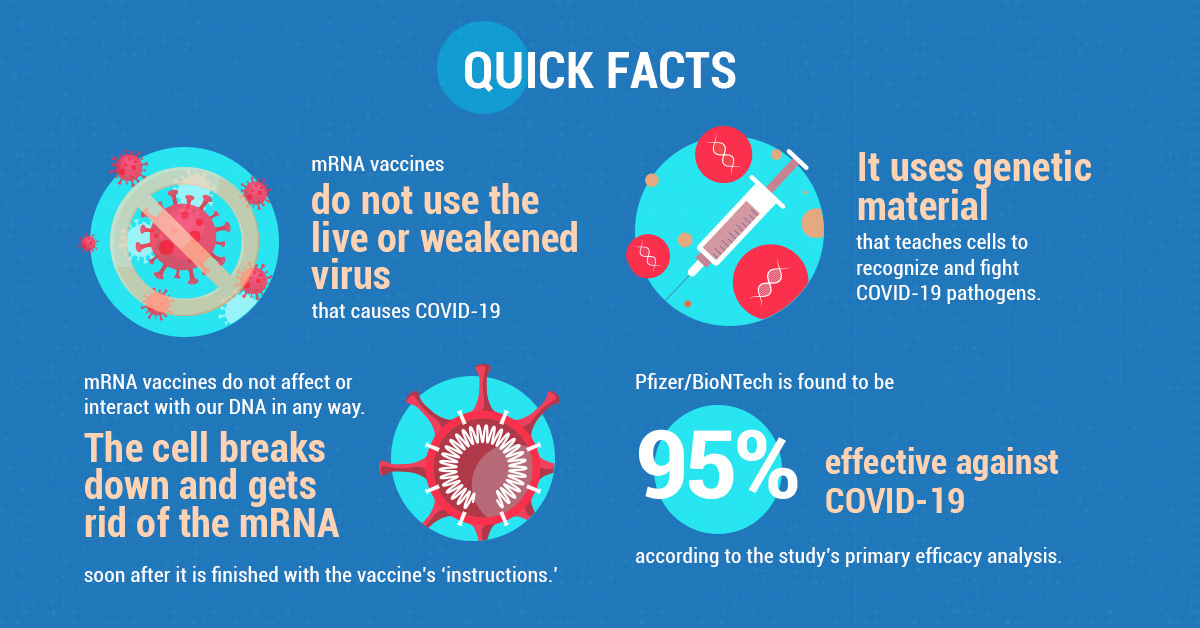 Pfizer/BioNTech have created a COVID vaccine candidate that uses a technology that has not yet been used for any approved vaccines to date: a messenger RNA (mRNA). Traditional vaccines are usually made up of attenuated or inactive viruses or their proteins to trigger an immune response. With mRNA vaccines, modified genetic material is introduced to the body to teach cells to build harmless viral proteins themselves.

The Pfizer/BioNTech vaccine specifically teaches cells to make harmless spike proteins similar to those on the surface of SARS-CoV-2.

mRNA vaccines are also more durable against pathogens that are inclined to mutate, such as coronaviruses and flu viruses. Since mRNA vaccines only instruct cells to produce harmless viral proteins, they are also able to weather virus mutations.

The Pfizer/BioNTech vaccine was found to be 95% effective against COVID-19, as per the study’s primary efficacy analysis. Their clinical trial has enrolled over 43,000 participants from diverse backgrounds, and no serious safety concerns have been observed.

As of November 18, 2020, Pfizer/BioNTech has achieved the safety data milestone required by the US Food and Drug Administration for Emergency Use Authorization. Pfizer/BioNTech has also already applied for the FDA EUA on November 20, 2020. Both companies expect to produce up to 50 million vaccine doses for global distribution in 2020. By the end of 2021, they expect to produce up to 1.3 billion doses. 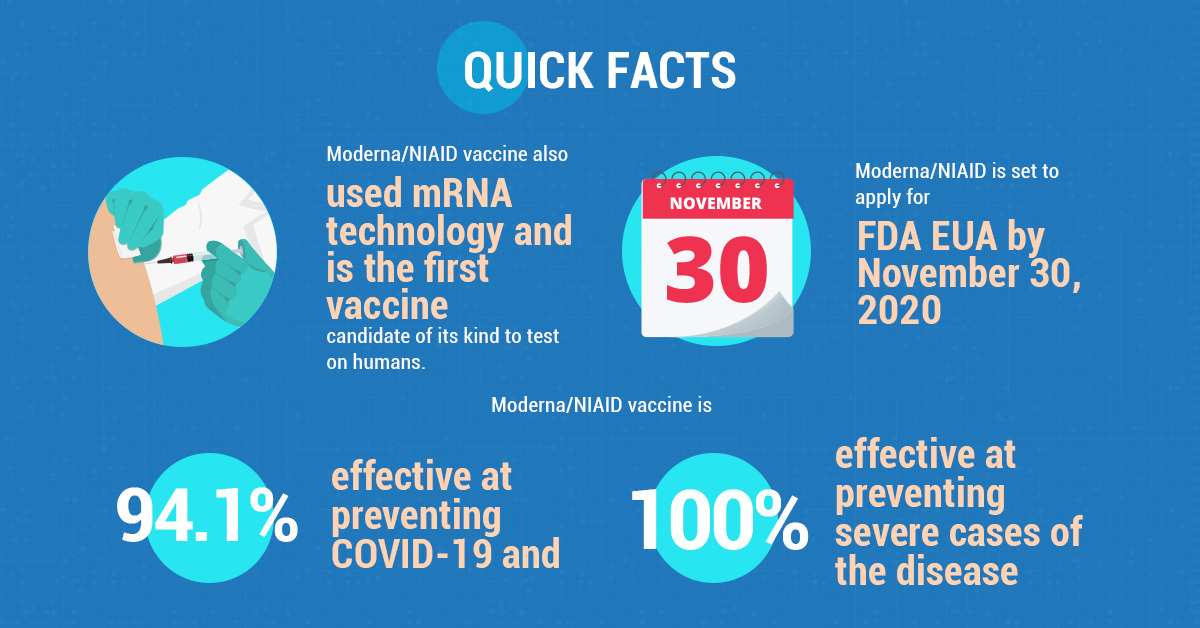 Moderna’s mRNA vaccine, developed with the National Institute of Allergy and Infectious Diseases, was the first to be tested in humans in the United States. It is also one of the first COVID vaccine candidates to release early results from its phase 3 trial. Like the Pfizer/BioNTech vaccine candidate, the Moderna vaccine also uses the novel mRNA technology to develop the vaccine.

Moderna has recently released updated efficacy data from its Phase 3 clinical trial. Since July 2020, Moderna has given either its vaccine or a placebo to some 30,000 people in the United States.

What’s more is that the vaccine candidate also suggests a 100% efficacy at preventing severe cases of the disease. None of the 11 vaccinated people became severely ill. The Moderna/NIAID vaccine candidate had similar efficacy for elderly people and people in racial minority groups.

Both companies intend to apply for an Emergency Use Authorization from the US FDA on November 30, 2020. Moderna/NIAID expects to have approximately 20 million doses of its vaccine available in the United States. They are also on track to create 500 million to 1 billion doses for global distribution by 2021. 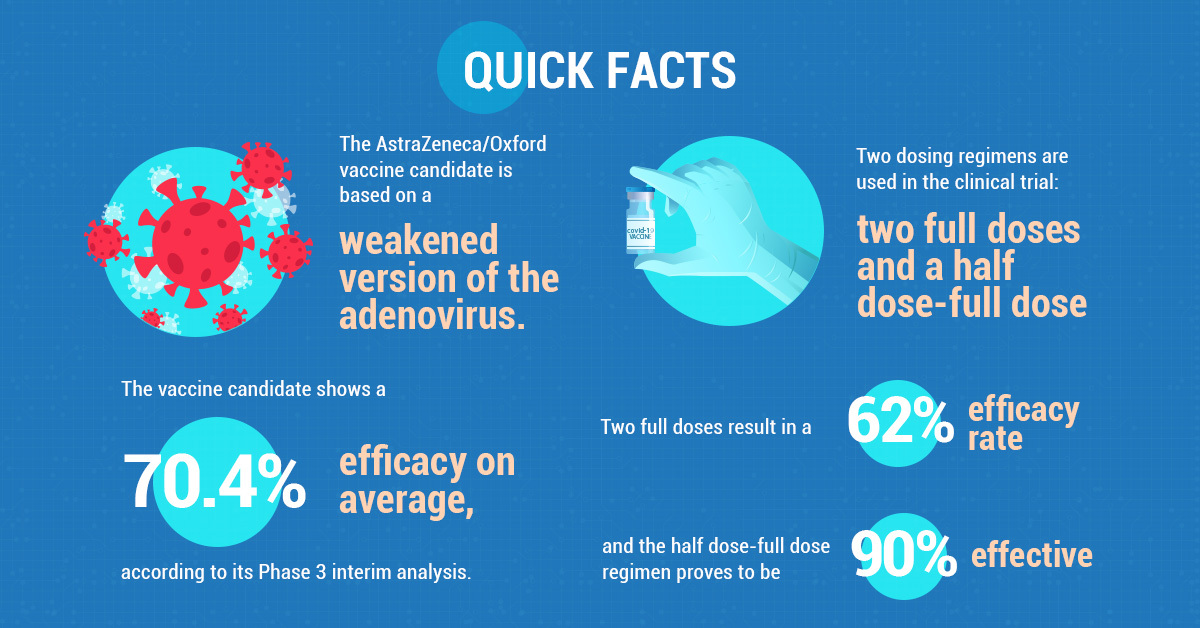 Adenovirus-based vaccines are also being tested by Johnson & Johnson, as well as other laboratories in China, Italy, and others. Most notable among the AstraZeneca/Oxford vaccine candidates’ peers is Sputnik V, a vaccine developed by Russian scientists. Sputnik V is already distributed across Russia on an emergency basis.

On November 23, 2020, AstraZeneca/Oxford reported that according to its Phase 3 interim analysis, the COVID vaccine candidate reduced the risk of being infected with COVID-19 by an average of 70.4%. The results, while positive, suggest that the vaccine may be less effective than the two others previously mentioned.

The preliminary results on the AstraZeneca/Oxford vaccine are based on the 131 COVID-19 cases in a study with some 11,000 participants. The findings are currently the subject of public scrutiny since AstraZeneca/Oxford has put forward two different dosing regimens.

Two full doses of the vaccine candidate appeared to be only 62% effective at preventing the disease. Meanwhile, half a dose of the vaccine followed by a full dose was found to be 90% effective. The analysis for the half dose-full dose regimen was also conducted on a small subset of the study participants. Only 2,741 received the half dose-full dose regimen, while 8,895 received two full doses.

AstraZeneca/Oxford currently face criticism about their lack of transparency about the differing dosing regimens. However, the company believes that the world should pay more attention to the trial’s positive results. On November 23, 2020, Menelas Pangalos, AstraZeneca’s Executive Vice President, said, “The mistake is actually irrelevant.”

“Whichever way you cut the data — even if you only believe the full-dose, full-dose data… We still have efficacy that meets the thresholds for approval with a vaccine that’s over 60% effective,” Pangalos said, according to the Wall Street Journal.

According to AstraZeneca, the company intends to seek emergency use authorization in different countries. They will also seek an emergency use listing from the World Health Organization to gain rapid approval for low-income countries.