According to the 2015 National Survey on Drug Use and Health, approximately 3.8 million people (1.4% of those ages 12 or older) reported misusing prescription pain relievers, while another 329,000 people reported using heroin. Within the same year, 52,404 lethal overdoses took place, making drug overdose the leading cause of accidental death within the United States. Stancliff et al estimated that as of 2012, approximately 80% of people dependent on heroin or prescription opioids were not engaged in any treatment and many in treatment do not use the most effective medication-assisted treatments available to them.

Despite recent increased awareness of opioid use disorder (OUD) and efforts to improve access to care, several barriers to treatment still exist, including financial, geographic, regulatory, and social. In 2012, only 2.2% of physicians in the United States obtained waivers to prescribe buprenorphine for the treatment of OUD. Of those who received waivers, 41.6% were psychiatrists. This may be perceived as a potential barrier to OUD treatment as patients are often resistant to referrals to psychiatric and/or addiction clinics given the stigmas commonly surrounding addiction and mental health. Furthermore, physicians with waivers were found to practice primarily in urban settings, leaving a large portion of the rural population without access to buprenorphine treatment.

With all this in mind, education is needed in regards to current and emerging treatment options for OUD available to multiple patient populations. Also, with the deaths due to drug overdoses still elevated, education on how to recognize and reverse an opioid overdose is needed.

This presentation will address the above needs by discussing the science behind opioid use disorder as well as reflect upon current statistics associated with its impact on the United States. During the discussion, opioid overdose risks will be discussed and participants will be able to practice recognizing key symptoms of an overdose situation. Steps of using naloxone will be discussed and connected to how to appropriately seek out treatment for maintenance of opioid use disorder. Finally, new buprenorphine products and the potential role of naltrexone will be applied to this stigmatized population.

At the conclusion of this continuing education activity, the participant will be able to:

At the conclusion of this continuing education activity, the participant will be able to:

Continuing Education Company, Inc. designates this enduring material for a maximum of 1 AMA PRA Category 1 CreditsTM. Physicians should claim only the credit commensurate with the extent of their participation in the activity.

AchieveCE is also an accredited provider by the Florida Board of Nursing (Provider #50-20641) and the California Board of Registered Nursing (CEP17265), and is an approved provider through reciprocity for the states of Arkansas, District of Columbia, Georgia, Kentucky, New Mexico, South Carolina, and West Virginia.

Participants must score a passing grade of 70% or higher on the activity post-test and complete an activity evaluation. There are no time limits and unlimited test-taking attempts. Credits will be reported automatically to CPE Monitor and/or CE Broker if your license information is entered properly in your profile. 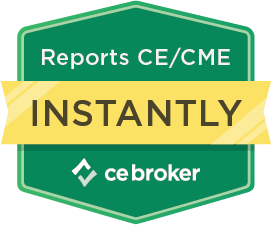 Get unlimited CE for one low annual fee.
Save time and money by becoming a member!

Check out other live webinars and home study activities to study at your own time!